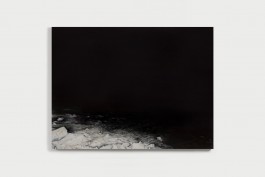 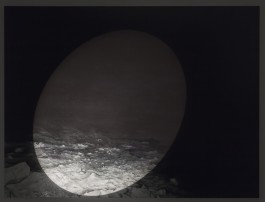 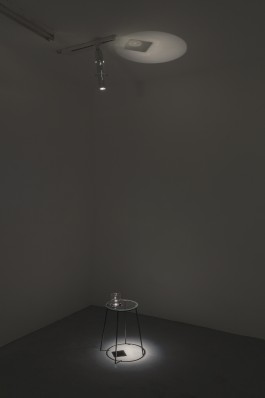 The mercury vapour, set humming by an electric current, gives off an invisible, ultraviolet light. When this phantom radiance hits the phosphor coating inside the tube it becomes visible and the whole studio is washed in an anaemic yellow fluorescence. The shadows’ hard edges dissolve and my eyes are teased by a barely perceptible flickering. Outside the window, the high-pressure sodium street lamp refracts off the wet road, winking like stars in my peripheral vision.

Scott Miles kills the fluoros and now, as I watch, he’s adjusting the aperture of a spotlight, letting it play across the large canvas at the end of the room. The palette of his painting appears to shift in response to the variation of the light. At first, it seems as though the polar landscape is illuminated by a yellow flicker of candlelight, but as the shutter closes and the beam intensifies it now looks as though this small patch of arctic tundra is lit by the flat blue glare of a high-powered LED torch. He’s demonstrating the range of options available to him, things revealed through experimentation, neither one better than the other, but each equally transformative. All the while, he’s filling me in on the science, how the variable opacity of the paint sets those photons buzzing, their reverberations dancing at the back of my retina. Painters are, by necessity, obsessively concerned with light, but with Miles this fascination goes further.

It took him to Greenland, north of the polar circle. His trip was timed to coincide with the polar night, a span of days during which the sun, owing to the inclination of the Earth’s axis, does not rise above the horizon. Miles’ distance from the pole meant that it wasn’t all inky blackness; light creeps in, curving through the atmosphere to worry and fray the fringes of the dark. Polar twilight lingers; a kind of pallid glow that leaches all colour from the landscape. He tells me that he could detect the belated arrival of the dawn only as a tint of blue returned faintly to the sky. But at night, true night, it was pitch black. Miles would venture out with his camera, the flash illuminating only a scant few feet before its flare was swallowed up.

Miles’ paintings capture this effect, suggesting not just the harsh, white light of the camera’s flash, but also giving a sense of being frozen within that 1/1000 of a second. The relationship between the lens and the brush, the process of mediation between photography and painting, is one of abiding interest for Miles. This does not, however, manifest itself through the stiff scrupulousness of photorealism, nor in a Richter-esque fascination with focus and film grain; the artist clearly enjoys the sumptuous qualities of paint too much to play that game. Rather, paint becomes an instrument for examining the kinds of images that photography produces, for revealing what the lens does to light.

An etymologic analysis of the word ‘photograph’ reveals its component parts: from the Greek, it is literally ‘light’ ‘drawing’. The camera’s optics distils the beam into an image, a process that Miles alludes to in a new sculptural arrangement. A spotlight shines down on a half-filled tumbler of water sitting atop a circular, glass-topped coffee table. Beneath the vessel is a printed image, distorted by the liquid. The incidental vibrations of our presence set the water rippling, throwing shimmering, undulating bands of light upon the walls and ceiling.

For Miles, this type of sculptural arrangement is something new. His time in the studio has allowed for experimentation and bold changes; this body of work represents more than a geographic departure for the artist. Though Miles’ normal instinct, he tells me, would be to eschew the theatrical, elements seem to have a crept in. The scale of his canvases is larger than it has been for some time and the spot seems reminiscent of a klieg light. It would be wrong, however, to imagine that these innovations are purely for dramatic effect. These paintings have expanded to encompass a vast darkness, but it is not an empty night: the brutal, intimidating presence of the polar landscape hulks, just out of sight. This sense is enhanced by an accompanying soundscape, a harmony of looming silence and sudden, unsettling noises that erupt like torch beams in the dark. Light distorts our perceptions, just as the ‘lens’ in Miles’ sculptural arrangement warps the image; it can reveal the smallest thing and, through its absence, conceal the most colossal. The aperture shifts once again and the polar landscape subtly alters. I stand and marvel at this trick of the light.

Emerging Writers Program
This text has been produced as part of the 2013 Gertrude Contemporary and Art & Australia Emerging Writers Program.
The program pairs four emerging arts writers with four professinal mentors for a year long program during which each particiapant produces a catalogue text for a Gertrude Contemporary Studio 12 exhibition and an artist profile for Art & Australia Magazine. This text will be available in the catalgue for Scott Miles, Light Falls Through following the exhibition. 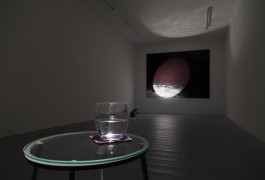 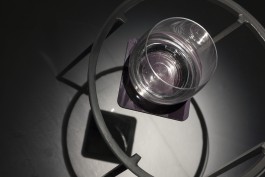 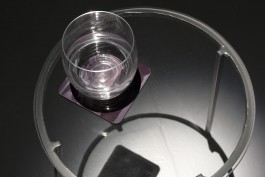 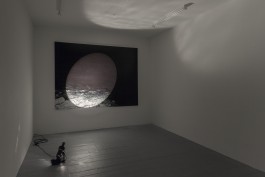 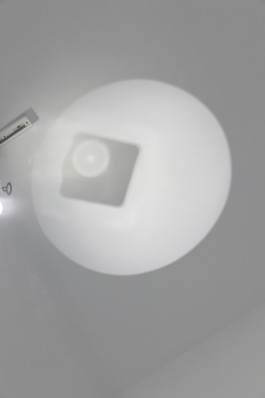